Upper Cervical Care is a rapidly growing form of natural health care that has helped millions of people regain and maintain optimal health. While western medicine tends to focus on the symptoms or effects (i.e. high blood pressure, high blood sugar, pain, etc.), upper cervical care seeks to locate and correct the cause.

As experts on the upper cervical spine, our chiropractic doctors focus on the intimate relationship between the top two bones in the neck, called the upper cervical spine, and, more importantly, a vital portion of the nervous system called the brain stem. This relationship is absolutely essential to the body’s ability to restore and preserve health.

Chronic health conditions and diseases are on the rise including migraines, asthma, autism, diabetes, epilepsy, fibromyalgia, acid reflux, hypertension, insomnia and more. The world is getting sicker with each passing year, in spite of the fact that we consume prescription drugs at an unprecedented rate. Amazingly, the United States represents less than 5% of the world’s population yet consumes nearly 75% of all the pharmaceutical drugs manufactured. We spend an average of $8,200 per person each year on health care, almost twice the average of the rest of the world. If this “traditional,” western approach to health care was the answer, wouldn’t the USA rank head and shoulders above other countries in overall health? According to the World Health Organization (WHO), the United States ranks 37th in overall health, below some Third World countries. We are over-treating ourselves and we won’t stop being sick until we stop making ourselves sick!

Isn’t it time for a change?

A New Perspective
Our current medical system excels at crisis care, such as the treatment of strokes, heart attacks or trauma. However, these cases only represent a small portion of today’s health concerns. The system fails miserably when it comes to prevention: keeping people healthy!

Many people live with chronic conditions that are preventable. Often, these conditions continue while the symptoms are treated by traditional health care. However, in recent years, dangerous side effects have become a major concern. By some accounts, hundreds of thousands die each year in the United States due to medical error and adverse side effects.

Due to this frightening trend, a paradigm shift is occurring in our country. Patients are seeking natural alternatives; they believe that traditional health care should be held to a higher standard, that profits and politics should no longer stand in the way of good health. Many Americans are looking for a different model of health care, one that puts their entire well-being first.

This “new approach” to health embraces the fact that the human body is a self-healing organism. We are created with the ability to heal and recover from almost anything and adapt to those things that we cannot. We are empowered to seek advice and ultimately make our own healthcare decisions, because we are the only ones who know what is ultimately best for us!
Upper Cervical Doctors understand that the world’s greatest “drug store” is within your own body. Your body knows how much insulin to secrete, antihistamine to produce, cholesterol to make—provided that we have 100% brain-to-body communication.

The brain stem controls and coordinates virtually every vital function of the body and acts as a conduit between the brain and the body. It extends from the brain down through an opening in the base of your skull and into the upper cervical region. Working much like a telephone cable, the brain stem has millions of individual wires, or nerve fibers, that send signals back and forth between the brain to every system, organ, muscle and cell within the body. We must have 100% brain-to-body communication in order to function properly and remain healthy.

The top two bones in the neck, the atlas and axis, are the only two vertebrae in the entire spine that don’t have an intervertebral disc. They are designed to move in six directions and are considered freely moveable. By contrast, every other bone in the spine, from the 3rd vertebra all the way down to the bottom, not only have a disc but also four inter-locking joints that only allow the bones to move in 2 directions. As a result, the top two freely moveable bones are much more susceptible to misalignment.
If one of the upper two bones becomes misaligned, two things happen. First and foremost, it irritates or interferes with the brain stem and reduces the brain-to-body communication. Wherever those messages were intended to go, whether it’s your foot, kidney, pancreas, heart, lungs, eyes or ears, it is going to malfunction, become sick and possibly shutdown. Secondly, consider the upper spine a kinetic chain, connected from head to toe. If either of the top two bones becomes misaligned, the rest of the body must compensate or adapt, resulting in total “body imbalance” (see chart below). In the end, your health and physical body will be compromised. This condition is called a subluxation. 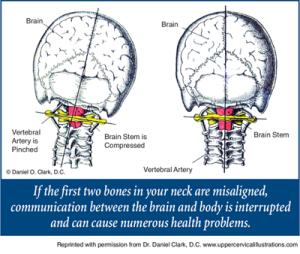 Every healing profession acknowledges that the body has an inborn or innate ability to heal itself. By restoring these healing messages, your body will operate at its very best and heal itself from the top down and inside out.

Check out our Apple Valley Clinic of Chiropractic Reviews

To schedule an appointment with Dr. Dallies simply click the button below.

To The Apple Valley Clinic of Chiropractic Family,

We wanted to reach out to you and let you know that we are taking extra precautions during this time. We want you to remember that your vest defense against COVID-19 is a STRONG IMMUNE SYSTEM!

-We will sanitize equipment between every patient.
-If you would like to wait in your car, please call and let us know and we will text or call you when it is your turn.
-If you are running a fever, have a new cough, or have traveled outside the US within the last 14 days, please call to reschedule.

Getting adjustments is one of the best ways to immediately boost your immune system! Others include: eating nutrient-dense foot, getting enough vitamin D, drinking lots of water, getting 7-8 hours of sleep per night, taking your probiotics, vitamin C, zinc, cod liver oil )for inflammation) and getting daily exercise. If you have any questions about staying healthy, please let us know.

If you don’t have an appointment yet for this week, call today to get set up!

The Apple Valley Clinic of Chiropractic website uses cookies, tracking pixels and related technologies. By continuing to browse our site, you are agreeing to our use of cookies.OkPrivacy policy